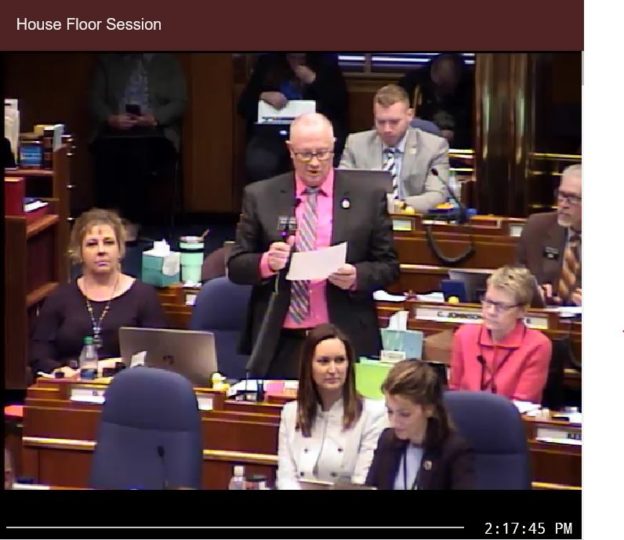 Representative Dick Anderson presents the reasons the Human Services committee recommends Do Pass for SB 2361 to the North Dakota House of Representatives on March 25, 2019.

The North Dakota Board of Social Work Examiners is currently drafting administrative rules after the 2019 passage of a new law that improves the state’s mobility readiness. SB 2361 amends the state’s social work practice act to align with licensing standards in other states. It was signed by the governor on April 1, 2019.

In presenting the bill to the North Dakota House of Representatives in March, Representative Dick Anderson cited several reasons for voting to pass the bill. They include workforce shortages of licensed social workers and the need to make it easier for social workers to gain licensure in North Dakota to “fill more jobs in rural communities that are currently in need of having a licensed social worker.” He also described how the bill’s language was developed. “It will align the North Dakota social work licensing laws with other states who are currently working on or have already passed legislation to align their laws with the Association of Social Work Boards model practice act,” he said. “This act reflects the best practices in social work regulations.”

Among the changes the bill makes to North Dakota’s Century Code is the adoption of the license titles found in the ASWB Model Social Work Practice Act. According to the North Dakota Board of Examiners website, “The new … titles were enacted to better align with other states and help with practice mobility.” And while most of the other changes were designed to update and clean up existing language in areas such as impairment, ethics, and mandatory reporting, the board also added completely new language to address electronic practice.

Now that the legislature has enacted SB 2361, it falls to members of the North Dakota Board of Social Work Examiners to write the administrative rules that will ensure the statute can be used. Board member Bianca Bell, LMSW, is leading that effort with board member Holly Hammarsten, LBSW, and public member Connor Griffin. They are working closely with Assistant Attorney General David Schaibley, who serves as legal counsel to the board.

Appointed to the board in July, Bell has learned on the job since the committee first met in August. Rulemaking is “a very formal process,” she says. “We have had to do our homework to understand how the law’s provisions came about. Our rules have to maintain the legislative intent but be digestible and usable.” At the same time as the committee writes rules to implement the bill amending the social work practice act, it is writing rules for another new law, SB 2306, which provides for expedited professional licensing for military spouses.

“Working with our legal counsel is helpful,” Bell says. “He designed a timeline for the rulemaking process to assist our members with understanding the process. The timeline also helps us stay on track, so we know what to achieve by those key dates.”

Now that the administrative rules committee has drafted rules, they have presented the document to the board via a shared draft. “The board is reviewing and making recommendations,” Bell says. “Once the board is satisfied with the changes, it will present the rule changes to the public for comment.”

“The rules will become official law once the legislative administrative rules committee approves them,” Schaibley says. He anticipates that process will be finished in the next eight months.

Schaibley’s role goes beyond the nuts and bolts of rulemaking. He says that when boards are making changes to law, they should seek a wide range of input. “I would suggest that  boards … place an ever-increasing weight on identifying stakeholders of all types and reaching out to them through multiple means,” he says. “Every contact and exchange of ideas can end up increasing support for or improving the board’s ideas and if not reducing opposition—then at least making the board more aware of the opposing viewpoints so as to be better prepared going forward.”