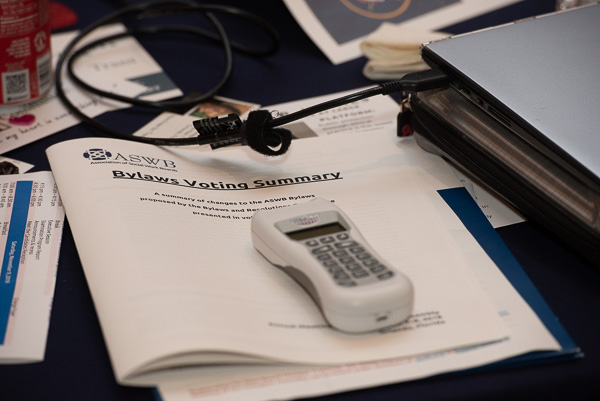 Delegates used keypads to enter their votes on each of the three voting groups containing proposed amendments to the ASWB bylaws.

A total of 53 delegates attended ASWB’s 2019 Annual Meeting, one of the highest turnouts in the association’s 40-year history. All delegates came prepared to represent their jurisdictions in business matters before the assembly. In addition to electing members to the 2020 Board of Directors and the 2020 Nominating Committee, delegates voted on proposed amendments to the ASWB bylaws and later participated in a strategic discussion related to the announcement of CEO Mary Jo Monahan’s retirement in July 2020.

The amendments were presented in three voting groups to ensure consistency when voting on related issues and for efficiency. Delegates were asked to consider the following recommendations from the Bylaws and Resolutions Committee, which met in person in July to consider its charges. To pass, amendments require an affirmative vote of two-thirds of the quorum. On Saturday, November 9, the required number of votes to pass was established at 36.

Discussion preceding the vote centered on questions about how these bylaws changes would affect member jurisdictions that currently do not use the exams. ASWB Chief Operating Officer Dwight Hymans responded: “If you’re not using the exam, this really doesn’t directly affect you at this point. If you would begin using the exam, then you would be bound by the bylaws and the expectation of the policies around our exam use procedures.”

Hymans further clarified the rationale for recommending the changes: “What this is doing is working on a way for us to begin using our bylaws to bind our membership to use of the exam according to our policies, as opposed to doing a contractual arrangement to bind our membership to use of the exams. … and it’s because of all those hoops, if you will, that many of your states in the U.S. in particular are asking us to jump through and telling us that we have to contract with the state … when we’re really not contracting with the state, we’re contracting with an individual candidate to take our exam.”

Voting Group 3, amendments to Article VII proposed by the Board of Directors to establish an executive committee of the Board officers: did not pass 35/18

Discussion preceding the vote focused on whether a need for an executive committee could be justified when available technology offers expedient means to convene the full Board of Directors. One concern raised by the delegate from the District of Columbia related to “the creation of what could be an apparent hierarchy of decision making,” given that the size of the Board “is not that large.”

President Tim Brown responded, noting: “Historically, we’ve had members of what would be considered the executive committee, either the president, president-elect, past president, treasurer, and the secretary … come together to work through whatever those issues might be. It’s always been kind of a loose process and really was no policy; nothing in the bylaws allowed us to come together to make these rapid decisions that were needed in the past and are expected going forward. And in the policy, we will always inform the full Board and let them know the reasoning behind what we did and why we did it. It’s not an overreach for this smaller group to take over and make decisions for the full Board. It is for expedient, fast response to things that come up suddenly that we need to help with and take care of for the association.” He continued: “The entire Board unanimously voted for this. They realize the need for this executive committee and so working at our level, we felt that this was the right thing to do and needed.”

The bylaws as amended for 2019 are now posted on the ASWB website.

At the end of the day, CEO Mary Jo Monahan, President Tim Brown, and President-elect Harold Dean gathered on stage for the generative discussion part of the meeting that was received enthusiastically by membership in 2018, its inaugural year. Rather than holding a generative discussion, however, Monahan introduced the time as a strategic discussion, saying: “This year we decided that we needed to have a strategic conversation with all of you because there’s a big decision that has been made by me. And we want to talk to you about it.” Monahan’s big decision, as membership now knows, is to retire in July 2020, at the end of her current contract. 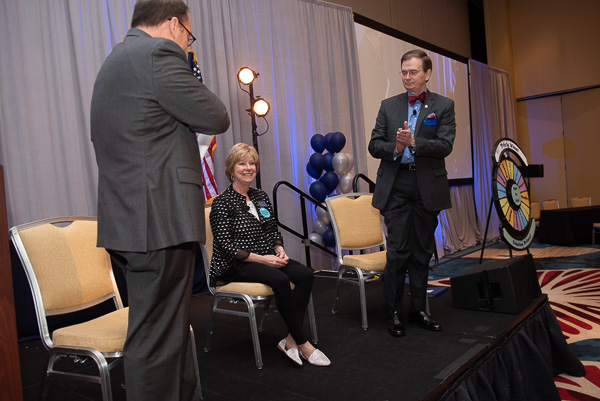 Monahan spoke of the goals that she set for herself and the organization and progress achieved to date. She talked about successful outreach within the social work profession and increasing the internal staff capacity to expand programs and services. These efforts have helped change the perception of ASWB as “the test organization” to recognition of ASWB as “a force in the social work profession, a force for regulation, and a force for protection of the public.” She discussed how outreach to the broader regulatory community has “elevated the reputation of social work as a regulated profession with other regulators.” She praised the members of the boards of directors she has worked with over her tenure for their willingness to embrace a governance as leadership model and to “become a much more dynamic force within this organization and use the knowledge, skills, and abilities of all the Board members … and … really growing this organization according to our values.” She also talked about her plans, which do not include “sitting on a beach in Florida sipping mai tais” but looking for opportunities to consult on leadership and possibly seeking out a seat on a not-for-profit board.

Brown emphasized that the Board had been working with Monahan for the last year to ensure a smooth transition. “This is a very thoughtful, planned-out process that will occur to make certain there’s the very least operational disruption. … We’ll want to make certain that senior executive staff are given the resources and the assistance that they need … because, you know, we are in a process of the new building and moving in that direction. This is an appropriate time for a transition for the CEO, but that will also be more change. And so, we want to make certain the cultural environment internally is supporting the staff and help them with those new types of adjustment.”

Dean concurred with Brown, stating: “We can assure you that this has been a structured process. We will be looking at who will succeed Mary Jo and give that our utmost attention to make the most thoughtful and best decision for ASWB.”

Members were quick to come to the mics to express their appreciation for Monahan’s leadership. Denise Capaci of Maryland thanked her for “giving us a really wonderful example of a female executive. Your grace and the way in which you are managing your career—I think is a model for so many women. And I really admire you. Congratulations.” Kathy Outland of Oregon said: “I appreciate that you are letting us know now. We have the opportunity to thank you for all you have done for ASWB. I’m happy that you get to see the building done during your tenure. … You will be missed.”

Regulatory responses to the pandemic

Message from the CEO

Message from the incoming CEO