Due to relocation, all ASWB online services will be unavailable as of Friday, May 29, at 3 p.m. EDT. Services will resume as soon as possible, but no later than June 8. Check back for availability.

With the 2019 Education Conference taking place in Arlington, Virginia, just an hour from Culpeper, all ASWB staff got to attend the conference on Friday, participating in two sessions and joining members for lunch. It was an opportunity for staff to increase their knowledge about ASWB activities and meet the members whom they support on a daily basis. 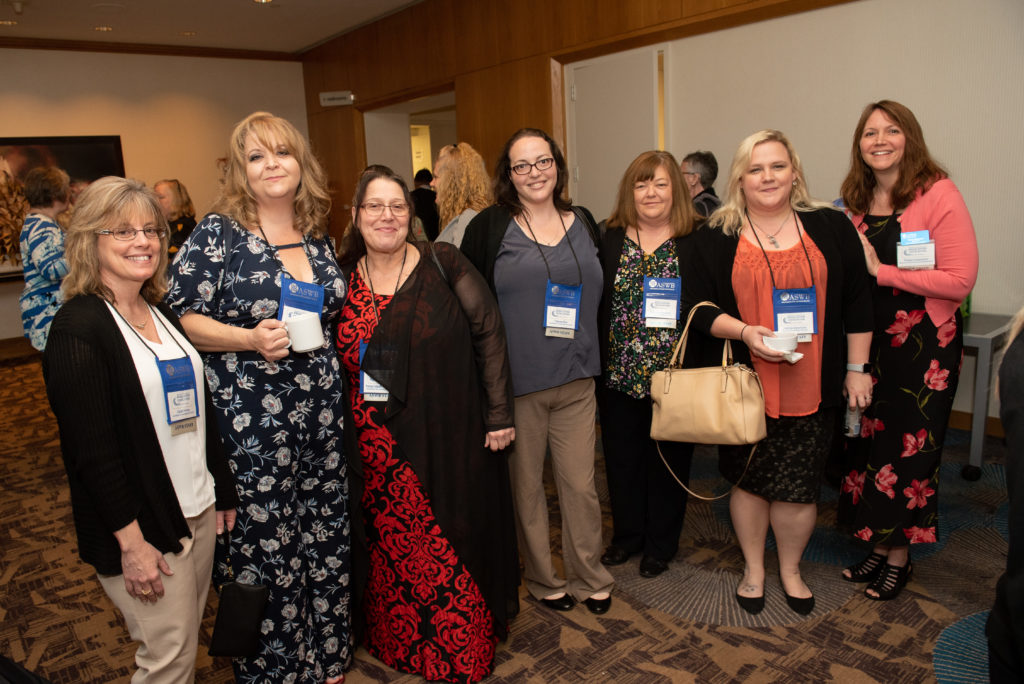 The year of festivities recognizing ASWB’s 40 years of service kicked off at the 2019 Education Conference with dancing to ’70s band Groove Train on Thursday, a photo booth with ’70s props and a museum table throughout the conference, and celebratory desserts at lunch on Friday. Between sessions, Board members HAROLD DEAN, PATRICIA O’REILLY, and ROXROY REID facilitated a trivia wheel contest where members answered questions about ASWB history to win prizes. Be sure to view the slideshow to see photos!

RICHARD GREGORY of Alberta was awarded the 2019 Distinguished Service Award from the Canadian Association of Social Workers. RICHARD was nominated by the Alberta College of Social Workers for this honor.

ASWB joins with the Arkansas Social Work Licensing Board in remembering ANGELA SANDERS, who passed away in April. ANGELA served two terms on the Arkansas board, from 2011 to 2019. During her tenure, she served in the LMSW position and was also vice-chairman from September 2017 to January 2018. ANGELA attended the 2018 Education Conference in Halifax, Nova Scotia, with her husband, VICTOR. RUTHIE BAIN, executive director of the board, writes: “I know ASWB allowed them some special memories together on that trip.” 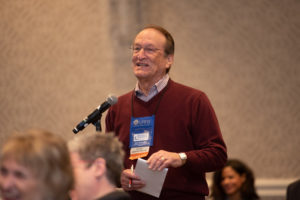 Thanks to STAN WEINSTEIN of Maryland for being a good sport at the 2019 Education Conference! The first time STAN came to the mic to make a comment, he got cut off because the session was ending and the session moderator was trying to keep to schedule. This timing thing happened twice more, turning other attendees into fans for STAN, advocating that he be given time to contribute. Lesson learned? Nobody puts STAN in a …. Oh, wait! Wrong movie. Just goes to show: Timing is everything. 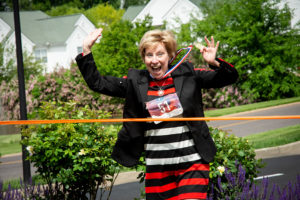 Note: During our 40th anniversary year, we’ll be bringing you Then and Now, featuring memories from the archives and current items, for a look at how ASWB has changed and grown! 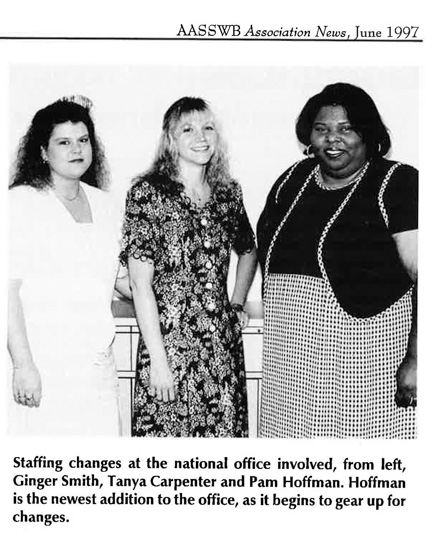 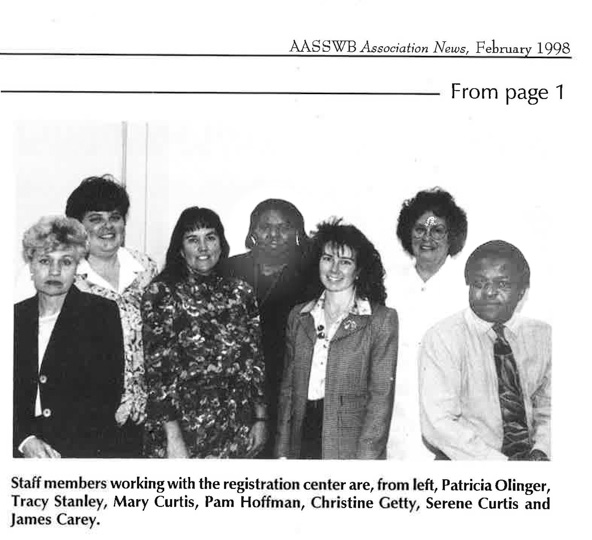 Then:  The Candidate Registration Center opened in December 1997, bringing the process of registering candidates for exams in-house. The task was formerly handled by the testing contractor. 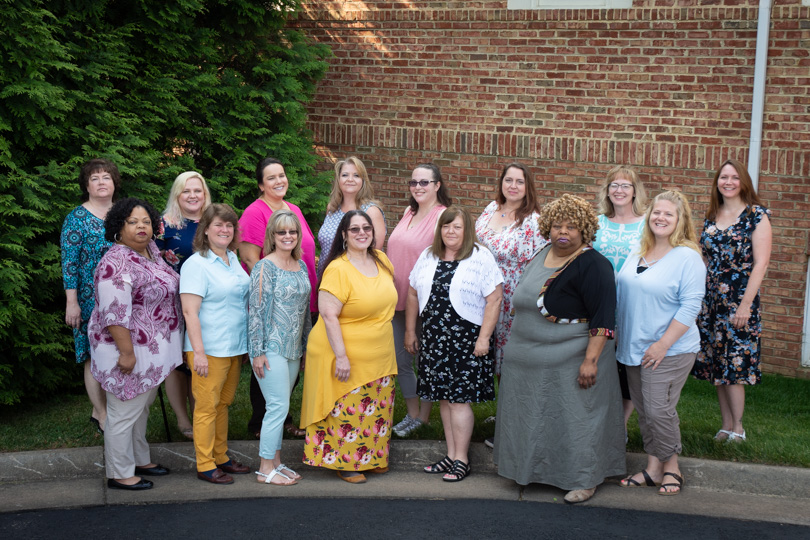 The members of the Examination Development department visited the new headquarters of the National Council of Architectural Registration Boards in Washington, D.C., in May.  “We shared ideas about exam development as well as exam-related products,” said LAVINA HARLESS, ASWB’s director of examination development. “We hope that we can meet annually to talk about common issues and challenges around the exam program.” 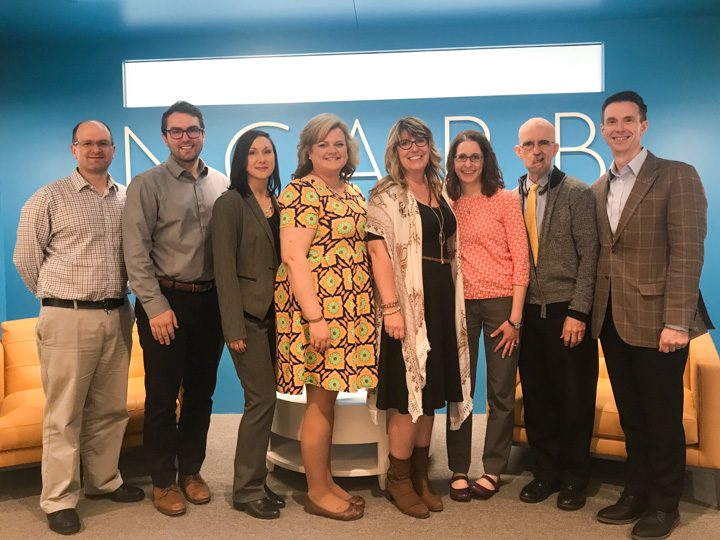 With the arrival of summer in Virginia, landscaping of the property surrounding the new ASWB headquarters has begun.  The design features natural meadows and native plantings. Zuni bowls, a beautiful erosion control measure, will help prevent runoff into Mountain Run, the nearby waterway. 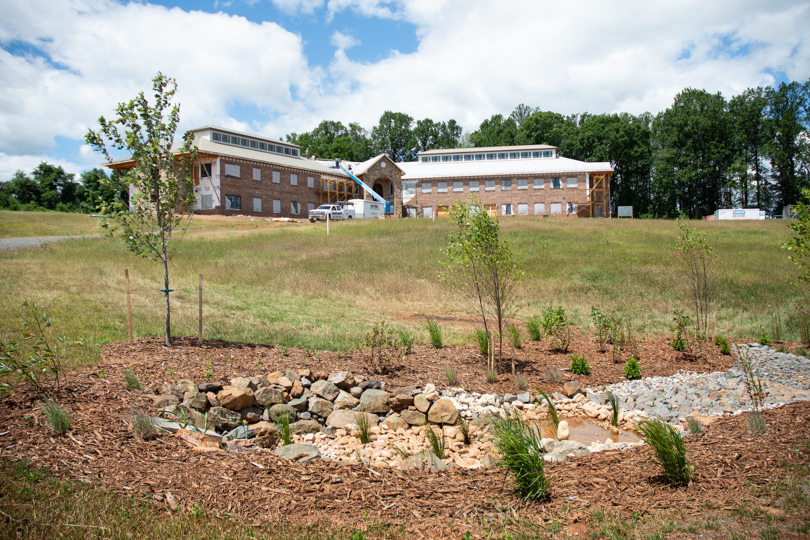 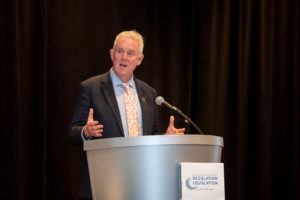 It was good to see TOMMY WELLS of Washington, D.C., again. The former D.C. councilmember was a speaker for the recent ASWB Education Conference session “See the wave like legislators see it.” We last saw him in 2009 when he spoke at the retirement party given for then ASWB president CHARLOTTE McCONNELL at the Woman’s National Democratic Club in D.C. CHARLOTTE was retiring as director of Family and Child Services in Washington, D.C.—not as ASWB president.

A New York state of mind 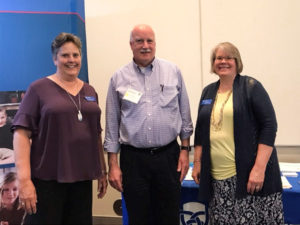 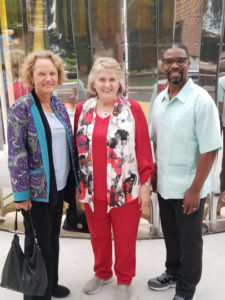 The New Board Member Training session held in early June in Alexandria, Virginia, included many regulators and a pair of social work educators. MICHAELA FARBER and DARRIN WRIGHT (shown with program leader JAN FITTS, center), two of the six 2019 Path to Licensure Institute scholars, attended to get an insider’s glimpse into social work regulation. The other four Path Institute scholars attended the March training. Several ASWB staff members also attended NBMT as trainees, an experience that deepened their understanding of their work.